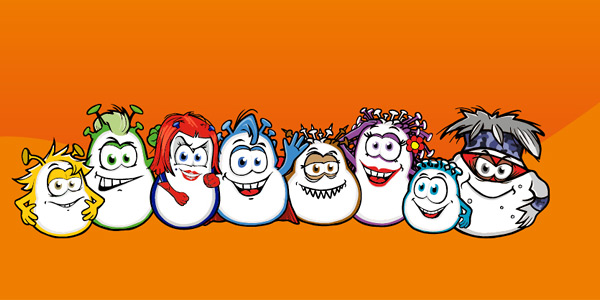 As sentinels of the immune system, dendritic cells (DCs) are naturally located in all tissues, especially those at the interface between the body and the external environment, such as skin, lung, and intestine. They are also present in lymphoid organs where they activate T cells, thus initiating immune responses.  Due to limited access to human solid tissues, most of the studies on DCs from lymphoid and non-lymphoid organs have been performed on tissues obtained from mouse models.

At a glance: DC cell subsets from lymphoid tissue (spleen and lymph nodes)

Different myeloid cell types have many markers and functions in common, such as expression of MHC class II, CD11c, CD11b, and antigen presentation. Therefore, the classification and identification of myeloid cells remain evolving subjects in the scientific community. Moreover, cell subsets and markers are not always consistent between mouse and human, leading to debates over the correspondence of mouse and human subsets.

pDCs are primarily located in blood and lymphoid tissues. They depend on the E2-2 transcription factor and express B220, Siglec-H, mPDCA-1 (CD317 or Bst2), as well as intermediate levels of MHC class II, CD11c, and costimulatory molecules. pDCs are poor stimulators of T helper (TH) cells, but upon stimulation with bacterial DNA containing particular unmethylated CpG motifs or upon viral challenge, they produce large amounts of type I IFN and acquire antigen-presenting capacity (PMID: 16172135, 15728491).

cDC1 are located in both lymphoid and non-lymphoid tissues, and express higher levels of MHC class II and CD11c compared to pDCs. They show dependence on the Batf3 transcription factor and are characterized by different sets of markers depending on their location, origin, and function. Resident spleen and lymph node cDC1 express CD8a, XCR1, and CD24. When cDC1 migrate from non-lymphoid tissue to a draining lymph node, they can be distinguished from resident cDC by markers expressed in the periphery such as CD103, by activation molecules, by higher levels of MHC class II, and lower levels of CD11c. However, when resident cDCs are activated during inflammation, these markers cannot be used to discriminate between migratory and resident cDCs.

cDC2 exhibit the same MHC class II and CD11c expression pattern as cDC1, but express additional markers not present on cDC1 and depend on a different transcription factor, i.e., IRF4. Resident spleen and lymph node cDC2 express CD4 and SIRPα. Migratory cDC2 that infiltrate lymph nodes can be distinguished from resident cDCs under non-inflammatory conditions by the expression of MHC class II, CD11c, and peripheral and migratory markers (e.g. CCR7 and maturation markers).

cDC2 induce different responses, such as activation of ILC2 and TH2 cells against parasites and during asthma, and induction of ILC3 and TH17 immune responses to extracellular bacteria (PMID:    27760337).

Research on mouse DCs is hampered by difficulties in isolating viable cells from solid tissues in numbers that allow comprehensive downstream investigation, such as flow cytometry analysis, cell sorting, and transcriptional studies. One critical aspect is the reliable dissociation of tissues, yielding cells with high viability and epitope integrity. Both enzymatic and mechanical dissociation of spleen is necessary to achieve a high recovery of DCs which are trapped in connective tissues and are inadequately released by simple mechanical meshing (PMID: 23516985).

The Spleen Dissociation Kit, mouse in combination with the gentleMACS™ Octo Dissociator with Heaters enables efficient, automated, and hands-free enzymatic and mechanical dissociation of several spleens in parallel. Both cell recovery and the level of epitope preservation are high in the resulting single-cell suspensions. For more details, see the corresponding spleen chapter.

At a glance: Kits and reagents for the isolation of various DC subsets 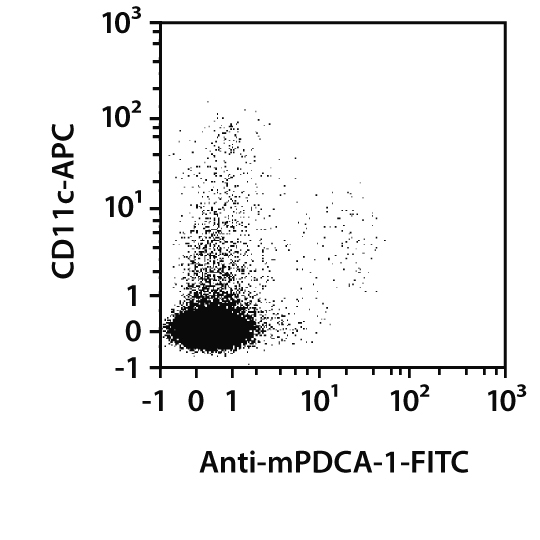 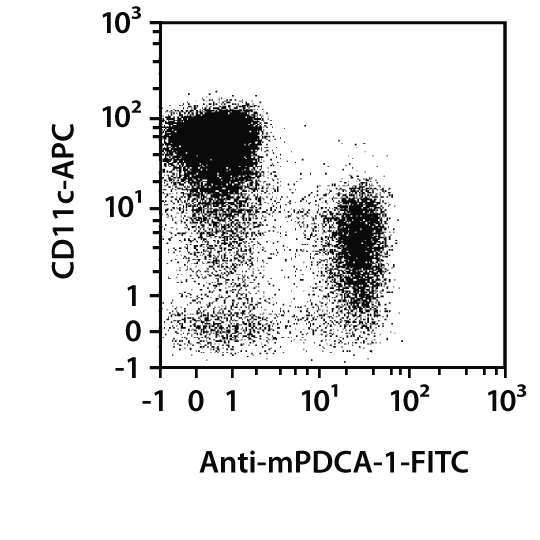 Isolation of total untouched DCs. Pan DCs were isolated from a mouse spleen cell suspension using the Pan Dendritic Cell Isolation Kit, mouse, an LS Column, and a MidiMACS™ Separator. Cells were fluorescently stained with CD11c-APC and mPDCA-1-FITC and analyzed by flow cytometry using the MACSQuant® Analyzer. Cell debris, dead cells, and lineage-positive cells were excluded from the analysis based on scatter signals, propidium iodide fluorescence, and lineage antigen expression.

The cDC2 subset of DCs co-expresses CD11c, CD11b, MHC class II, CD40, CD80, and CD86 and is negative for CD8 and CD205. cDC2 represent the major population of DCs in spleen (56% of all CD11c+ cells) and constitute only a small population in peripheral lymph nodes (4% of all CD11c+ DCs). The CD4+ Dendritic Cell Isolation Kit, mouse isolates CD4+ cells from an enriched DC sample, after depletion of non-DC cells. 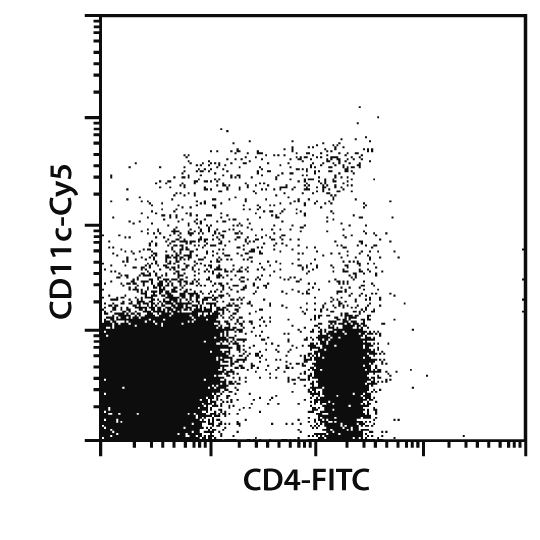 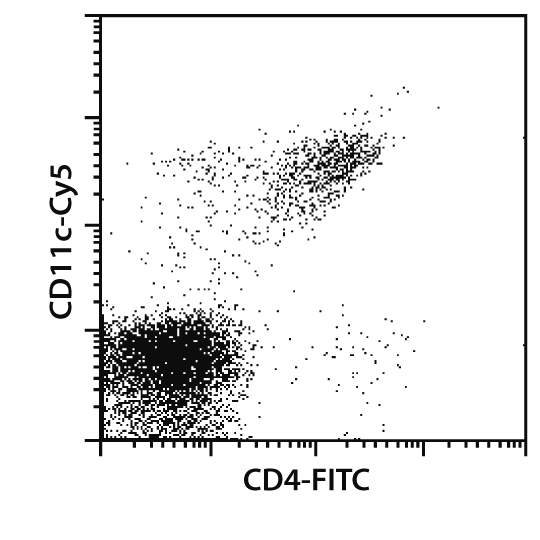 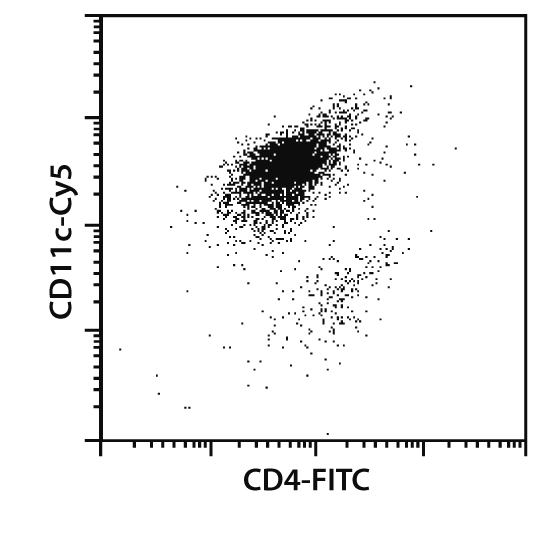 Two-step isolation of CD4+ DCs from a mouse spleen. CD4+ DCs were isolated from a spleen cell suspension using the CD4+ Dendritic Cell Isolation Kit, mouse, an LD and two MS Columns, a MidiMACS™ and a MiniMACS™ Separator. Cells were fluorescently stained with the antibodies as indicated and analyzed by flow cytometry. Cell debris and dead cells were excluded from the analysis based on scatter signals and propidium iodide fluorescence.

In the past, studies of cDC1 were hampered by the low frequency of this cell type and a lack of specific cell surface markers. Recently, however, the receptors Clec9A and XCR1 have been identified as specific markers for cross-presenting cDCs in lymphoid and non-lymphoid tissue. The Anti-XCR1 MicroBead Kit (Spleen), mouse represents a novel method for the fast and easy isolation of cross-presenting DCs, that allows routine enrichment of XCR1+ DCs with high recovery and purity, without pre-depletion of non-target cells or laborious cell sorting. 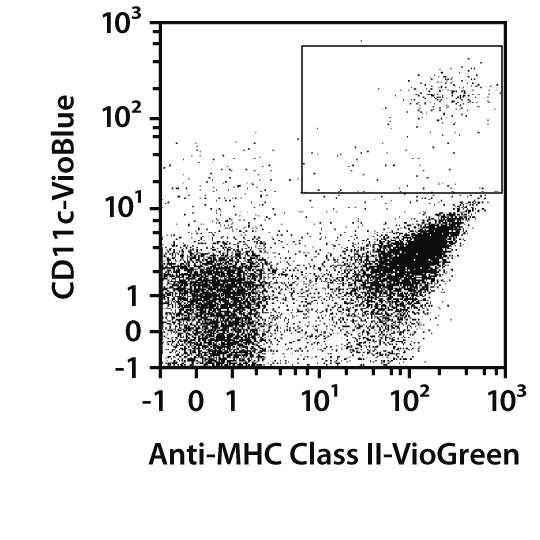 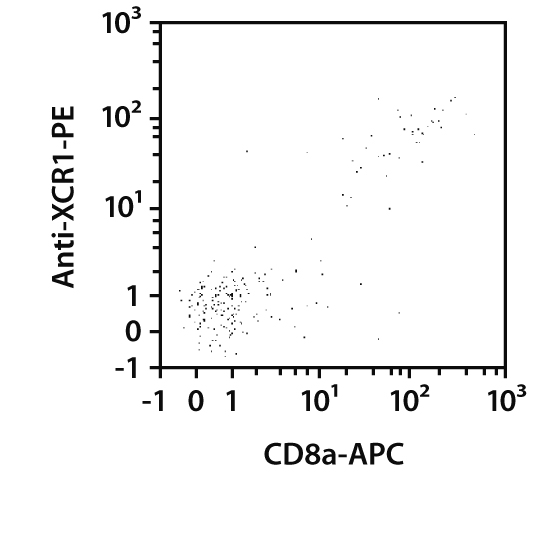 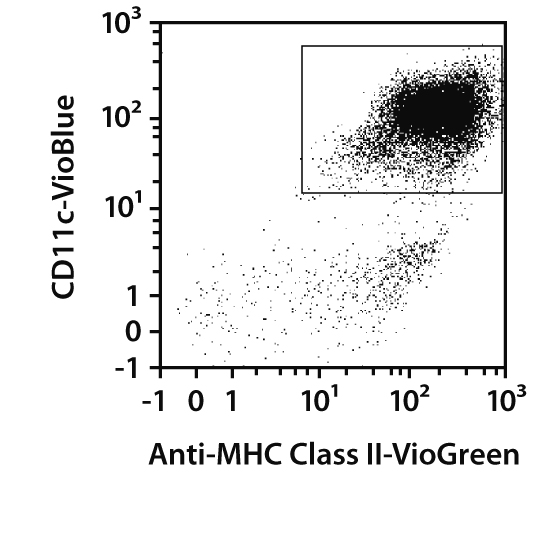 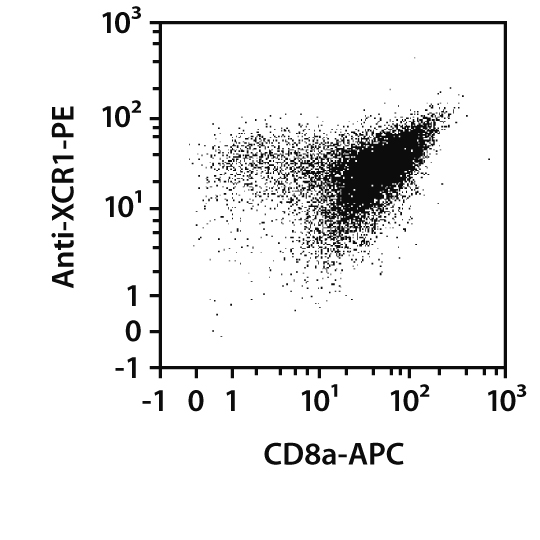 Fast isolation of cross-presenting DCs from mouse spleen. XCR1+ DCs were isolated from a single-cell suspension of dissociated spleen tissue using the Anti-XCR1 MicroBead Kit (Spleen) with two MS Columns and a MiniMACS™ Separator. Cells were fluorescently stained with Anti-MHC Class II-VioGreen™, CD11c-VioBlue®, Anti-XCR1-PE, and CD8a-APC and analyzed using the MACSQuant Analyzer 10. Cell debris, dead cells, and autofluorescent cells were excluded from the analysis based on scatter signals and propidium iodide fluorescence. The dot plots on the right show conventional DCs gated on CD11c+MHC class II+ cells, stained for markers of cross-presenting DCs (CD8a and XCR1).

pDCs can be isolated from spleen by positive selection using the Anti mPDCA-1 MicroBeads, mouse or by depletion of unwanted cells with the Plasmacytoid Dendritic Cell Isolation Kit, mouse, which was designed for the rapid enrichment of pDCs. 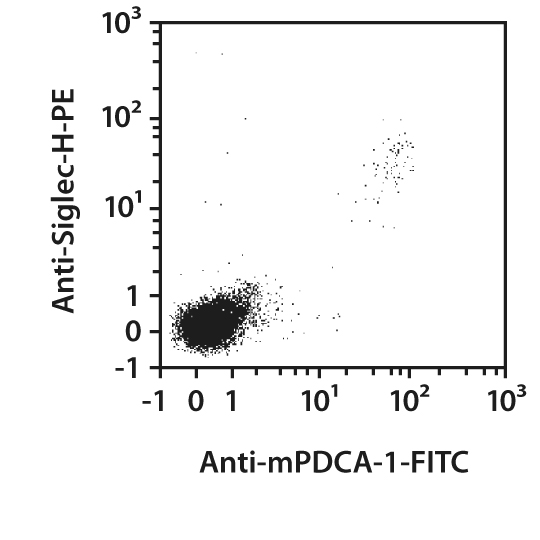 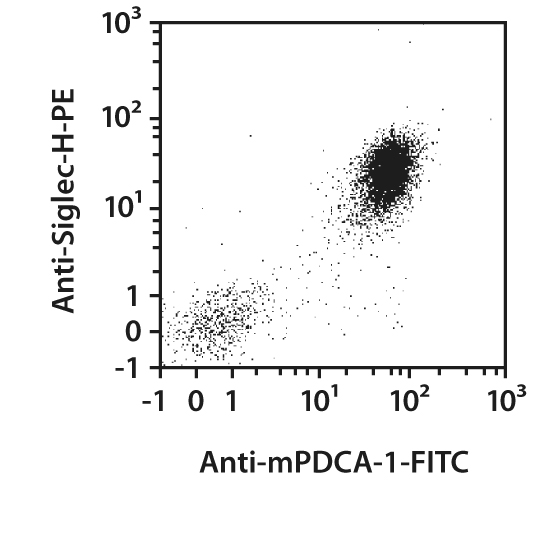 Depletion of non-target cells generates a highly enriched population of pDCs. pDCs were isolated from splenocytes using the Plasmacytoid Dendritic Cell Isolation Kit, a MidiMACS Separator, and an LS Column. Cells were fluorescently stained with Anti-mPDCA-1-FITC and Anti-Siglec-H-PE and analyzed by flow cytometry on the MACSQuant Analyzer. Cell debris and dead cells were excluded from the analysis based on scatter signals and propidium iodide fluorescence.

Phenotyping or enriching DCs based on surface markers can be challenging because several myeloid cells share similar marker patterns, and different DC subsets can strongly modify their surface marker expression depending on their location and activation status. Furthermore, enzymatic tissue dissociation can affect surface epitopes. Optimization of antibodies with a specific and consistent enzyme cocktail is important to avoid false negative staining that compromises the identification of specific DC subsets.

At a glance: Markers for the detection of DCs from lymphoid tissue by flow cytometry

DCs can be cultured in vitro and stimulated by antigen or toll-like receptor (TLR) ligand presentation.

At a glance: Kits and reagents for the stimulation of DCs from lymphoid tissue

Effective stimulation of antigen-specific T cells is achieved reliably with PepTivator® Peptide Pools.  This extensive panel of virus- or tumor-specific antigens consists of 15-mer peptides with 11-amino-acid overlaps, covering the complete sequence of the respective antigen.

Antigen targeting of antigen-presenting cells (APCs) via specific receptors has been used to induce effective antigen-specific cell responses and characterize the function of new receptors on APCs and compare these with well-known receptors. The Ova Antigen Delivery Module Set was developed for in vitro targeting of ovalbumin to APCs such as DCs. The set includes all reagents needed for the isolation of DCs, for antigen delivery, and for subsequent analysis of antigen presentation.

At a glance: Kits and reagents for the generation of BM-DCs

Each DC subset resident in spleen and lymph nodes (pDCs, cDC1, and cDC2) has a corresponding subset in non-lymphoid tissues that shares the same ontogeny and presents a similar but not identical phenotype (PMID: 23516985). This peripheral phenotype, in addition to certain activation markers, often allows the distinction of counterpart cells migrating into non-inflamed lymphoid tissues.

At a glance: DC cell subsets from non-lymphoid tissues

The complexity of DC phenotyping makes it essential that all epitopes that are needed to identify subsets are preserved during tissue dissociation. Miltenyi Biotec offers optimized kits for the preparation of single-cell suspensions from several tissues, including lamina propria, lung, and skin. These kits together with the  gentleMACS™ Octo Dissociator with Heaters provide optimal conditions for a combined enzymatic and mechanical tissue dissociation.

At a glance: Kits and reagents for the separation of DCs from non-lymphoid tissues

The CD11c MicroBeads UltraPure, mouse are optimized for the rapid and easy isolation of mouse DCs from single-cell suspensions of lymphoid and non-lymphoid tissues, such as lung and lamina propria. These MicroBeads greatly improve recovery and purity of the sorted population by specifically enriching viable cells. 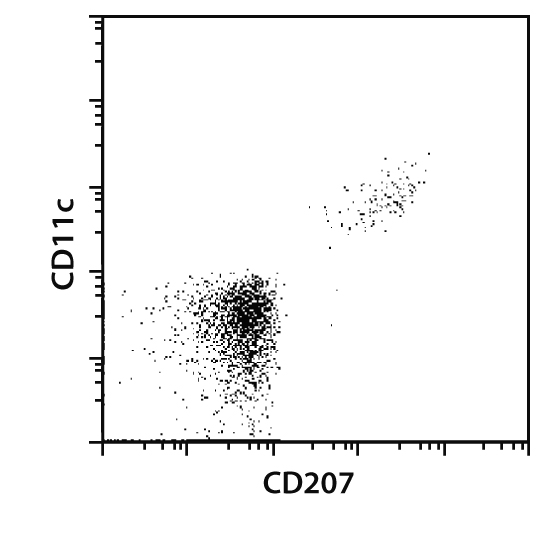 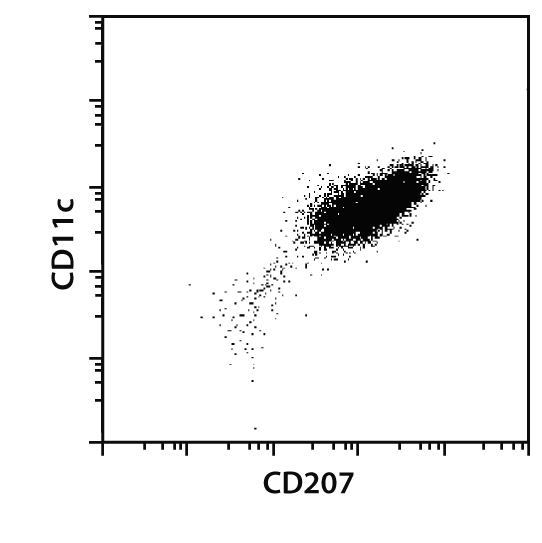 Langerhans cells isolated from a mouse epidermis single-cell suspension. A single-cell suspension was prepared using the Epidermis Dissociation Kit, mouse. The Epidermal Langerhans Cell MicroBead Kit, one MS Column, and a MiniMACS Separator were used to isolate the Langerhans cells, which were fluorescently stained with CD207 and CD11c and analyzed by flow cytometry on the MACSQuant Analyzer. Cell debris and dead cells were excluded from the analysis based on scatter signals and propidium iodide fluorescence.

At a glance: Markers for the identification of DCs from lymphoid and non-lymphoid tissues