Discover our dynamic mesenchymal stem cell (MSC) workflows highlighting the importance of implementing effective and agile solutions from the beginning. Whether your interest demands optimized flow cytometry reagents for quantification and phenotyping analyses, our complete workflow support from MSC isolation and expansion with our xeno- and serum-free medium, to differentiation and immunomodulation, Miltenyi’s MSC solutions provide the efficiency and viability you need to succeed. 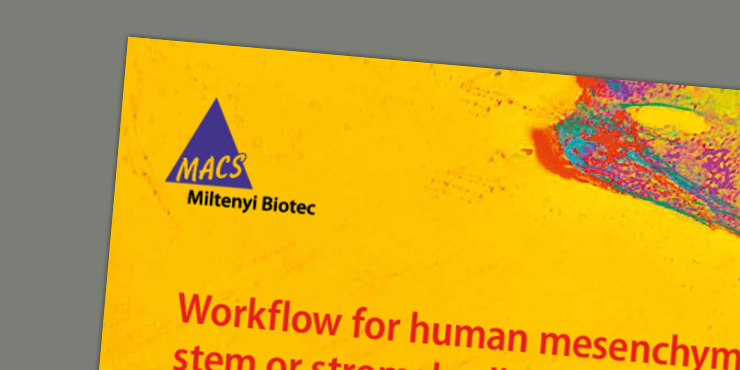 The BM-MSC Analysis Cocktail Kit was developed for the standardized, quick, and absolute quantification of human MSCs from fresh bone marrow aspirate by flow cytometry.  It takes only 30 minutes and requires only 200 µl of bone marrow sample per test. 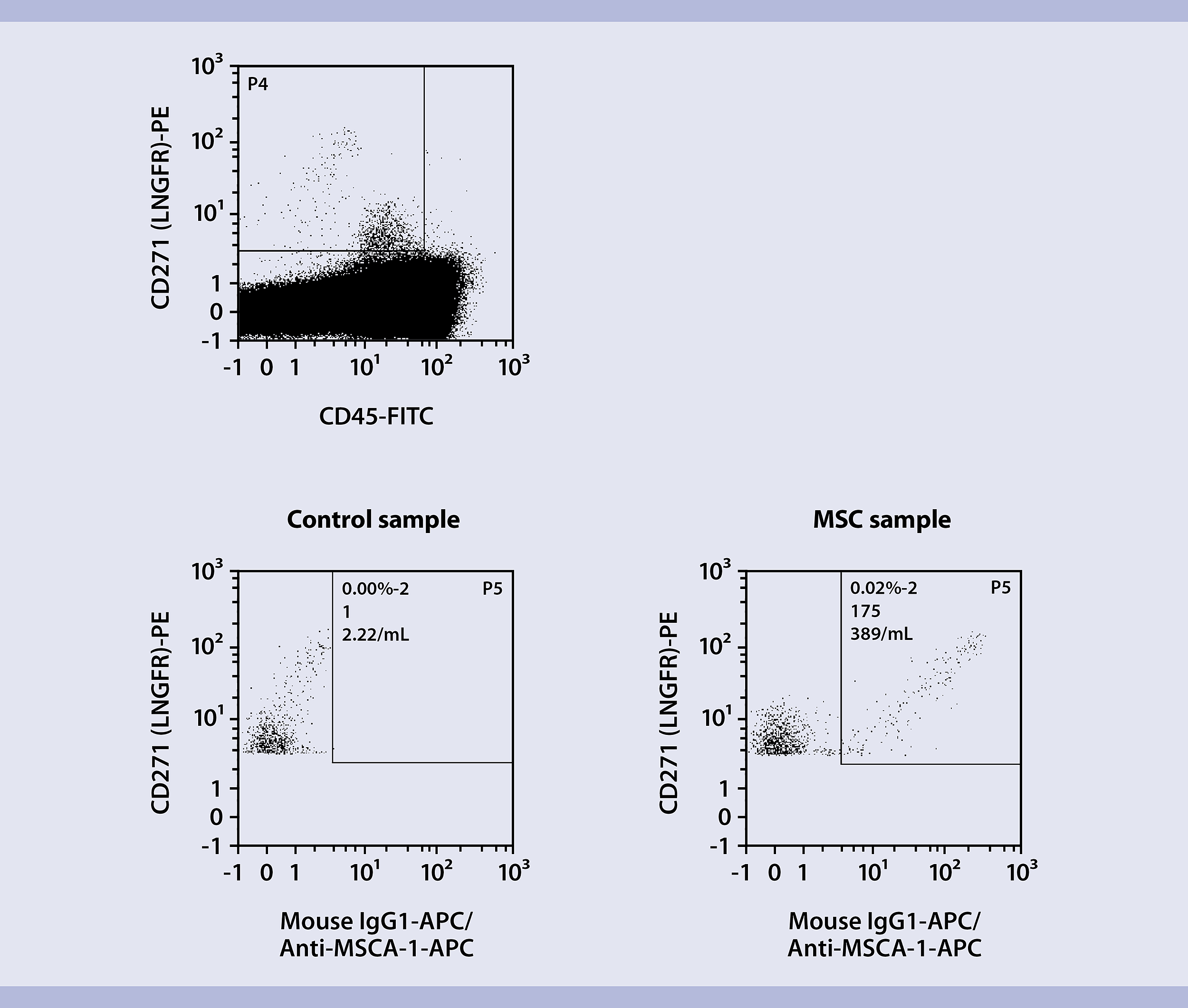 The BM-MSC Analysis Cocktail Kit, anti-human provides a cocktail of 3 fluorochrome-conjugated antibodies that are used to identify MSCs, These include the MSC-specific marker CD271 (LNGFR) and exclusion markers CD45 and CD235a. Anti-MSCA-1 (W8B2) is provided separately in the kit and can be added to specifically identify MSCs with high proliferative potential. 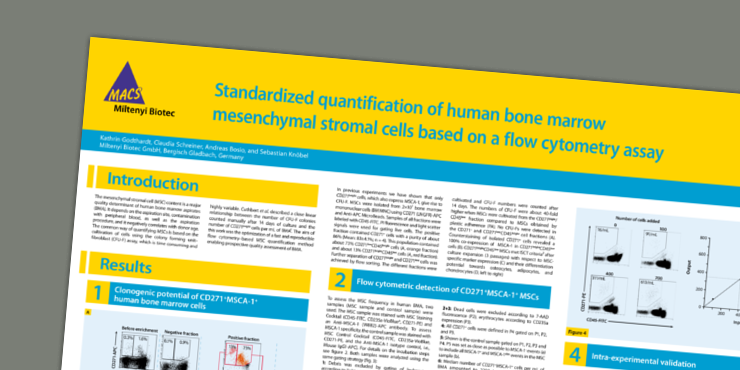 Enrichment of MSCs from bone marrow and adipose tissue

CD271 MicroBead Kits were developed for the isolation of CD271 (LNGFR)+ MSCs from bone marrow or adipose tissue with high yield and purity.

The Anti-MSCA-1 (W8B2) MicroBead Kit  was developed for the isolation of MSCA-1 (W8B2)+ MSCs with high proliferative capacity from bone marrow aspirates.

Our cell culture options provide reliable solutions for the maintenance and expansion of MSCs with preserved differentiation potential and immunomodulation ability. Phenotyping of in vitro expanded MSCs

The MSC Phenotyping Cocktail Kit, anti-human, REAfinity was developed for the standardized identification and phenotyping of cultured human MSCs by flow cytometry based on the defined ISCT standards. 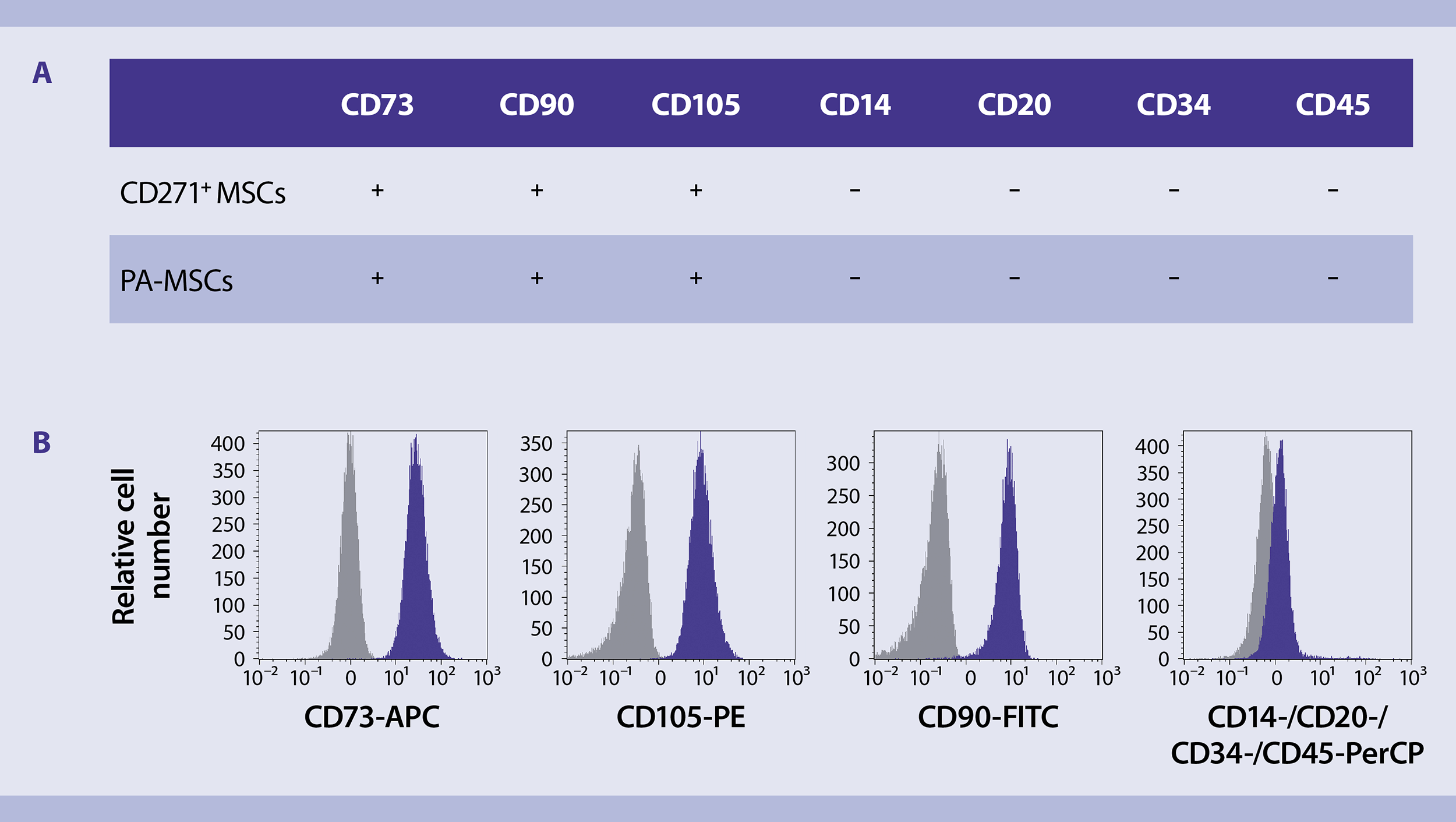 Phenotyping of in vitro expanded CD271+ MSCs and PA-MSCs 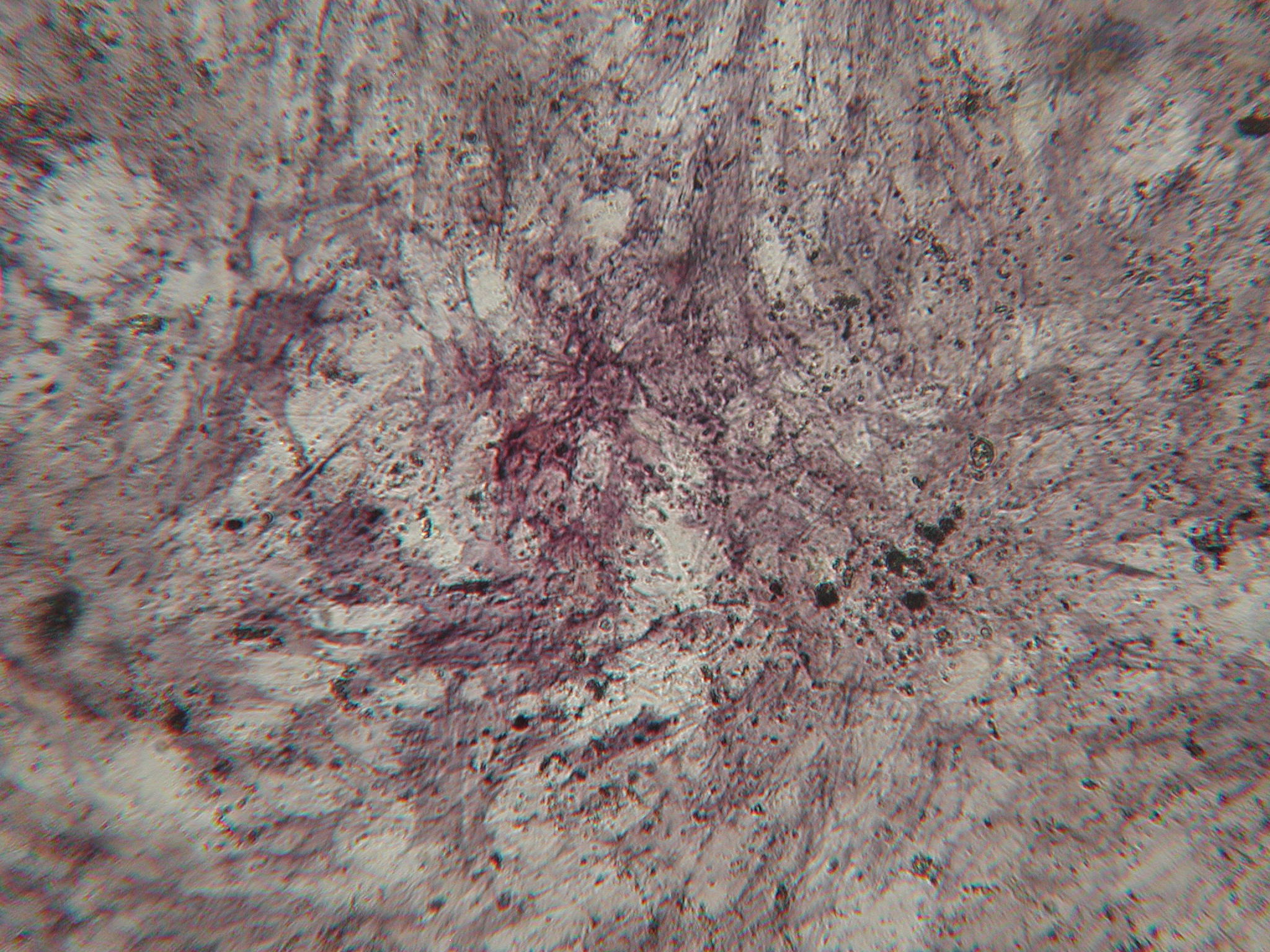 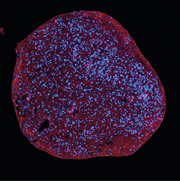 The suppression potential of MSCs varies among in vitro expanded cells and shows donor-dependent differences. MSCs can be “licensed” by inflammatory cytokines such IFN-γ and TNF-α to become more immunosuppressive and show a more homogeneous phenotype in this regard. The MSC Suppression Inspector, human was developed for standardized characterization of the immunomodulatory function of MSCs by co-culture with CD4+CD25– or CD4+ responder T (Tresp) cells. 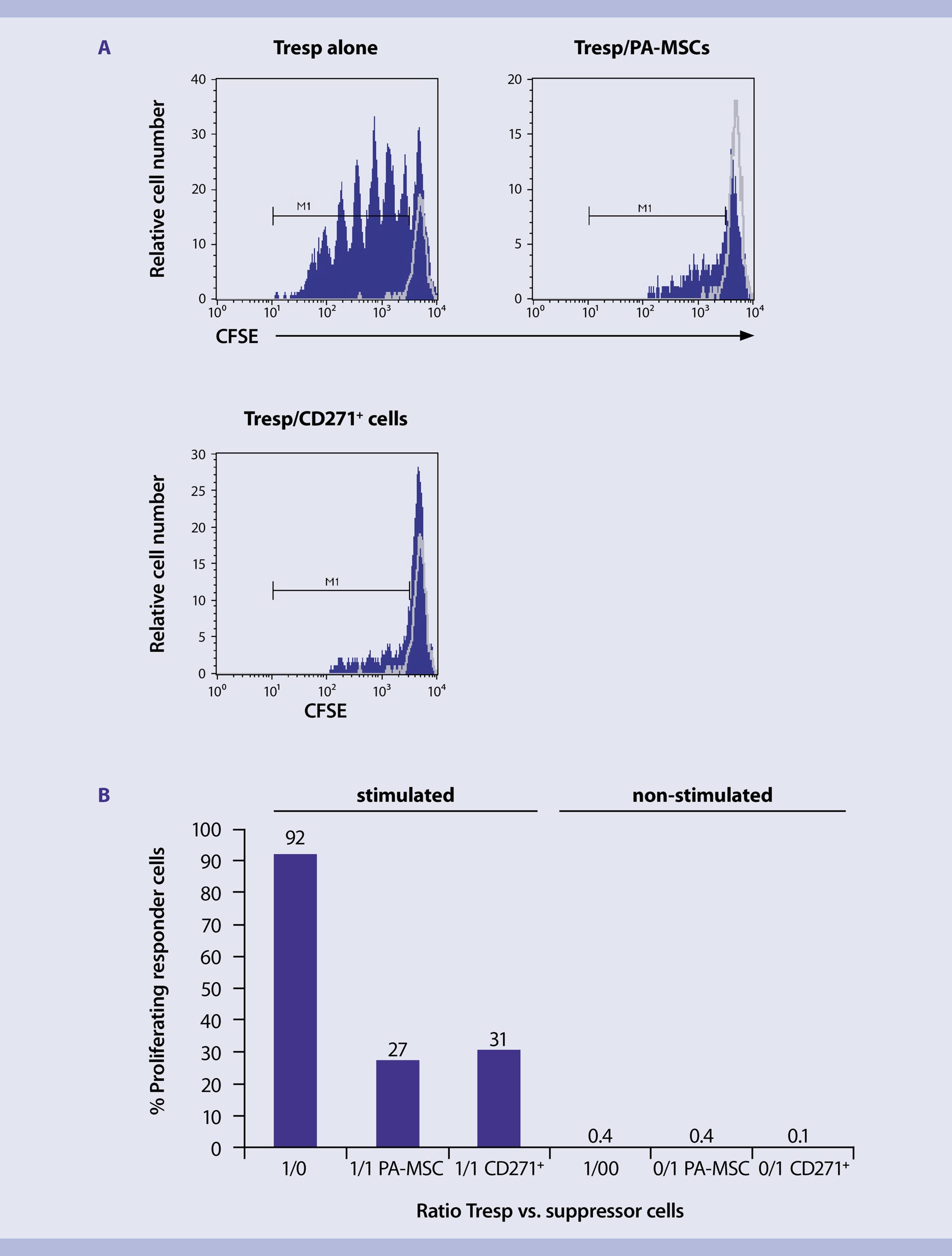 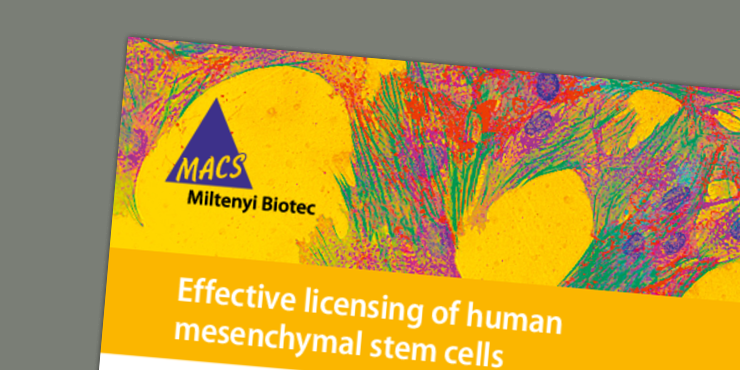 This application note describes the licensing of MSCs using IFN-γ and TNF-α and a procedure to analyze marker expression and the immunosuppressive characteristics of MSCs using the MSC Suppression Inspector, human.

Get acquainted with our protocols for your workflows in research of MSCs.