Apoptosis, a form of programmed cell death, occurs in multicellular organisms. To date, most of the key processes in cellular apoptosis regulation are identified and can be targeted by therapeutic strategies. The identification of the major regulators of apoptosis has boosted intense research efforts in developing therapeutic approaches that intervene with cell death, either in a pro- or anti-apoptotic direction.

Apoptosis can be divided into four major phases: initiation, early apoptosis, intermediate apoptosis, late apoptosis. Flow cytometry is widely used to analyze apoptosis due to the versatility afforded by its several technological benefits:

Apoptosis of primary tumor cells and virally-infected cells can be induced by cytotoxic T lymphocytes and NK cells. Such apoptosis induction results from the release of the cytotoxic molecules Perforin, Granzyme A, and Granzyme B by the effector cell, which themselves can be measured by flow cytometry.

The early phase of intrinsically mediated apoptosis can be measured by monitoring B-cell lymphoma 2 (Bcl-2) protein expression. The Bcl-2 family regulates apoptosis through the actions of both the pro-apoptotic and anti-apoptotic members.

Extrinsic-pathway induced apoptosis is characterized by translocation of phosphatidylserine (PS) to the outer leaf of the plasma membrane, loss of mitochondrial membrane potential, cytochrome C ad ATP release, and by activation of caspase-8 and -9 during the early phase.

In most normal, viable eukaryotic cells, the negatively charged phospholipid PS is located in the cytosolic leaflet of the plasma membrane lipid bilayer. PS redistribution from the inner to the outer leaflet is an early and widespread event during apoptosis. However, in necrosis, PS becomes accessible due to the disruption of membrane integrity. PS exposure by apoptotic cells serves as a trigger for recognition and removal by macrophages. Annexins are a family of structurally related proteins that can bind specifically to cellular membranes. Annexin V has a very high affinity for membranes containing the negatively charged phospholipid phosphatidylserine, and can be used as a marker of early apoptosis events. 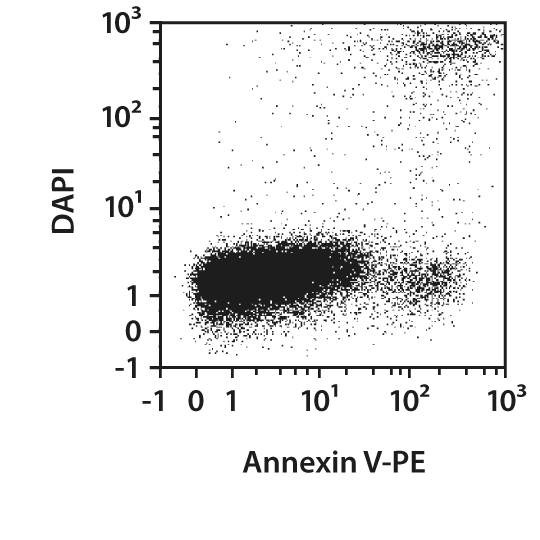 Jurkat cells, cultured with staurosporine (50 nM) for 15 hours, were stained with Annexin V conjugates followed by staining with DAPI and analyzed by flow cytometry using the MACSQuant® Analyzer.

The intermediate stage of apoptosis is characterized by cytochrome c release, activation of caspase-3, 6, and 7, Poly-ADP-Ribose polymerase (PARP) cleavage, cell shrinkage, and activation of nucleases. 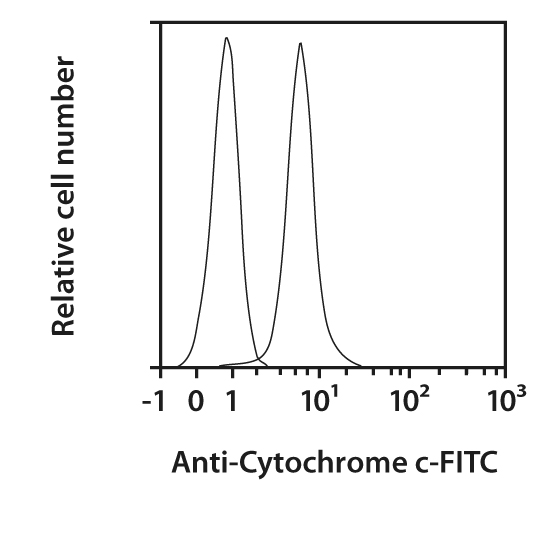 Human lymphocytes were fixed and permeabilized followed by intracellular staining with Anti-Cytochrome c antibodies. Flow cytometry was performed using the MACSQuant Analyzer. Cell debris was excluded from the analysis based on scatter signals.

The late stage of apoptosis is characterized by DNA fragmentation, nuclear collapse, formation of apoptotic bodies, and phagocytosis by macrophages.

DNA fragmentation can be visualized by flow cytometry using DNA-binding dyes, such as PI, 7-AAD, DAPI, and Hoechst 33342. Cells in the late phase of apoptosis can be fixed and permeabilized using 70% ethanol. Such permeabilization results in the leakage of DNA fragments created during the late phase. Therefore these cells will have less DNA, and when stained with a DNA-binding dye, will exhibit less fluorescence than is normal. When represented on a DNA profile plot, which is usually represented on a linear scale, these cells appear as a sub-G1 population. 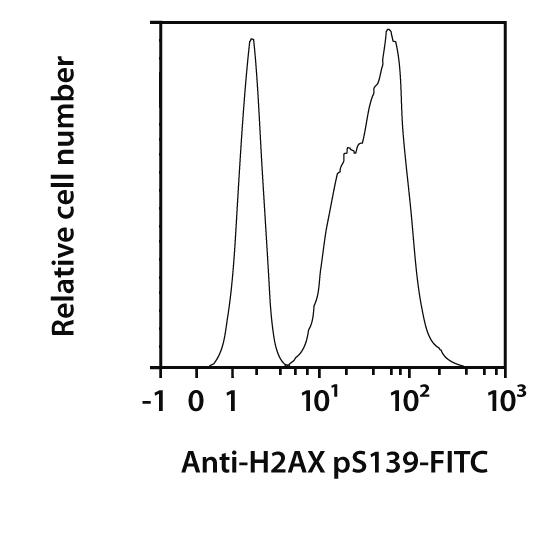 HeLa cells were fixed and permeabilized using the Cell Signaling Buffer Set A. Cells were then stained with Anti-H2AX pS139 antibodies and analyzed by flow cytometry using the MACSQuant Analyzer. Cell debris were excluded from the analysis based on scatter signals.